Connect 4 meets Chess but with a HUGE twist. You have to move one of your balls and one of your opponents every time. That’s basically it. Super easy to learn (This game will take 30 seconds to learn) but a lifetime to master!

This is our favourite game and a truly unique concept. Reason: You move one of yours and one of your opponents pieces every move!

GOAL: The goal is to get four in a row of your chosen colour before your opponent.

SET UP: Start by setting up the boar as shown in the image (1), with alternating coloured pieces around the perimeter of the board and two placed near the centre. 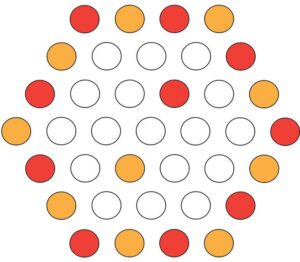 MOVING: Each turn you must move one of your coloured pieces and one of your opponent’s pieces as a single unit. The two balls must be next to one another, and the movement can be in any direction as long as both destination spaces are empty. The real strategy starts as you try to manoeuvre your pieces for the win without setting your opponent up to win.

There are only three types of moves permitted: broadside, in-line and switch as shown here in image 2.

Note: You cannot undo your opponent’s last move. You can move the same two balls, but not to the position that they previously were in and you cant switch the same pair that your opponent just switched

Alternative set up: Drop the balls randomly to begin.

There are no reviews yet.

Only logged in customers who have purchased this product may leave a review.

Your cart is empty.

Order now to avoid missing the Christmas shipping window. Cut off for delivery is Dec 8. Dismiss